Mersey Under Threat As Mayor Proposes to Sell River

Waterfront to be sold for luxury sailing club.

At 11.45 yesterday morning, the people of Grotty Cash woke up to the shocking news that the Mayor, Joe Angryman, has proposed to sell off the stretch of the Mersey waterfront at the Pier head.


The proposal, which he claims could raise up to £100 (depending upon which developers build the ugliest model and make up the most far fetched claims) will see this stretch of the river sold in order to build a private marina, with five star bar and club house for yacht owners, drug dealers, and Russian gangsters. 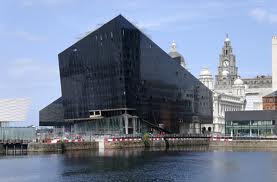 The Mayor claims that this will provide much needed revenue for the city and that it is vital towards raising funds to maintain Mann Island and clearing up all the bits falling off the Black Coffins.


Grotty Cash needs to attract millionaires with their yachts, says Joe, and we cannot achieve this without providing a proper clubhouse for them to relax in. The proposal could also create up to six jobs including, bar staff, toilet cleaners and shoe polishers. Including tips, this could boost the local economy by over 20 shillings a week, he says.

Following a public outcry, the Mayor decided that any money raised will be used to protect the area and ensure it is maintained for future generations.  It will be completely ring fenced, he said,  a giant electric one. This will be to keep the locals out.
The last thing the yachting fraternity want is a load of locals, beggars and buskers hanging around outside singing Hey Jude.  This part of the river is nothing more than a yobs toilet at moment or somewhere to dump a hand gun. And it is not officially part of the river according to the original plans. 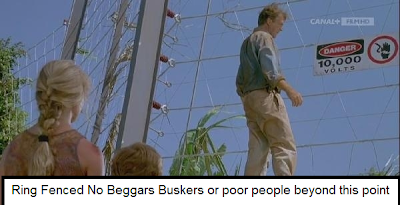 Sold Down The River?


Cabinet member for Ebay and regeneration, Councillor Aigburth Canopy, hit back at critics, saying he will do everything in his power to ensure that the river is maintained.  This is a very small stretch of the river, he said, pointing to a map torn out of the Ladybird illustrated edition of the Domesday Book and has never specifically been designated at part of the main river. It was always intended to be allocated for a private luxury yachting club going back many years to the last time we tried to flog it.

He went on, "the river is the jewel in our clown, but we are under no statutory obligation to maintain it and we simply do not have the resources.  But now after people getting so angry about us trying to flog this bit again, we have come up with the brilliant argument that we would use some of the money to buy a mop and bucket and one of those picky-up sticks to keep it tidy.  This area has been designated by me as surplus to requirements, it is not used by the public, and the fact is that this bit of the river is completely waterlogged."  To illustrate his love for the rest of the river Mr Canopy was pictured sailing his Airfix boats around the £5 Billion derelict Liverpool Waters site.


Former leader of the Liberally Doomed Party, Lord Bonkers of Chilblains, hit out at the Mayor's plans. Dressed as King Canute and carrying a large duck under his arm,  he said,

"We turned the tide on them last time they tried to pull this stunt and sell off our wet spaces. This is going back to the days of  Sir Troffer Jones, selling off the city's assets and our heritage with dodgy deals. And his Missus  rubber-stamping appalling developments, and making themselves a packet from flogging the historical ships chandlers to go and live on a private........no hang on.... not Sir Troffer, the other bugger, Bessie Hatton...er Braddock...no, Derek...Degsy.....you know, the idiot fireman!

No not Wally Bradlow, the other one. The Millicent Tendency."

Unfortunately Lord Bonkers's duck then began quacking furiously and he was unable to comment further as they got into a brawl.

However, the current leader of the Coalition Apologists, Councillor Richard Chimp, soon swung into the debate.

"Take no notice of Storeyteller!" he said, "..he's the bugger that spent all the money and left me to take the rap for the Boot estate fiasco. So you can't believe anything he says." 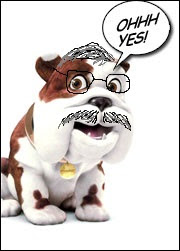 Adopting the bulldog spirit and Churchillian tones, Councillor Chimp said "Ohhhh Yes!  We've had all this before. We fought them on the benches, we fought them on the land. Never in the history of humourless conflict has so much been decided by so few. We are demanding that this be called in and I will oppose it with every hair in my moustache"


So once again, under the guise of regeneration, parts of Grotty Cash are at risk of being handed to fast buck developers, in order to build playgrounds and more habitats for the well off.

It's now  with the promise that some of the money raised will be used to provide a parking space for a dozen hot dog and burger vans for obese families to queue up at every time an outdoor music festival is cancelled due to the weather. 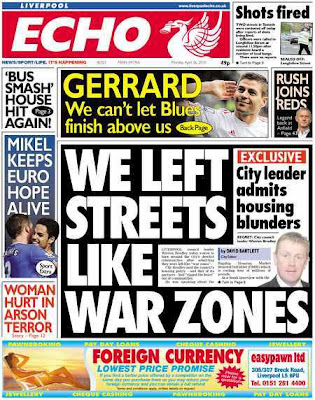 Acres of derelict land stretch across the city, Warren's War Zones, helped and encouraged by Prescot's disasterous HMRI and the zealots who saw only demolition as the answer, detroying housing that would last another couple of centuries to build cardboard estates with a lifespan of 30 years.

But those clearance areas are now largely left to sit and rot, along with the people around them. Many of those people will face redundancies, long term unemployment, with attacks and cuts in benefits. Some may even be forced out of their homes because of the bedroom tax while there is no alternative, affordable housing.

If this carries on, people may start getting the idea that the regeneration priority is only about executive homes, luxury apartments, Shanghai Towers, conference centres, penthouses, hotels, bars and Harvey Nicks. They may start to think that nobody is interested in the communities and problems faced by ordinary people. All they are interested in is the developers, grabbing land on the cheap and property few ordinary people can afford with offices and hotels we don't need.

And if they ask why nothing is being done to develop housing for those who are in most need, they may start to believe it's  because that doesn't enrich developers.

The developers are more than happy to sit on the vast stretches of land that they were given, literally, at "Knock Down" prices.

The thing is, once it's gone, it's gone and the money raised from sales like this will soon be gone too. For what? Short term economics, robbing Peter to pay Peel.


So is it all about money and being made bankrupt by the coalition slashing the LA grant?

There is possibly one service that could produce a major saving and raise money. Our old friend Liverpool Direct Ltd.

Well maybe Eric Pickles thinks we don't need such a large grant as we seem to have a lot of cash to spend on one particular service.

Because with all of the cuts and increasing lack of resources to finance council services, with millions more cuts to come, we still maintain a joint venture contract for a call centre that keeps you waiting, only to speak to some poor bugger being screamed at in their earpiece to get you off the line if you go over 3 minutes, who knows nothing about the service you need and just reads from a script.

A deal that has us financially strangled by contracts for IT equipment that costs up to 3 times the price of what's available on the high street and includes a compulsory maintenance charge three times the value of the actual equipment.

The Untouchables with Robbit Stack as 'Elluva Mess.

A so-called joint venture that refuses to reveal expenditure and income to the council, a "joint venture" that has contract deals with other authorities and services, making millions in profit and yet none of that profit comes back to the city....the partner, who can't even get access to their books.

And yet we cry poverty whilst handing them buckets of cash, with no idea of what we are being charged for. Yes we are facing severe savage cuts, but does Liverpool Direct Ltd still seem unaffected by any cutbacks and untouchable?

So in such circumnstances, every time we hear about how we must raise vital resources, why we must cut this service, sell off this asset or bit of green space and how we face another £30 million cuts, there is the fundamental question of why we continue to pay over £60 Million a year to Liverpool Direct?

They simply refuse to abide by their own contractual obligations around open finances and transparency. It's all there in the contract but they won't reveal it and  the city makes no demands on them to account for the services they provide and still seem to be running scared of challenging them. We just hand them the money with little or no proper scrutiny.

We continue to make the Directors and BT richer at the taxpayers expense and at the expense of some of the services that are in danger and being cut.

People may start asking why?

Be Nice to eachother....
(by the way, sad news. Derek Batey is dead now so I'm keeping that slogan for myself and he can't touch me for it.)

Read more here, just in case I have got any of the facts wrong.

Posted by Professor Chucklebutty at 13:38 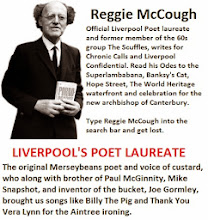 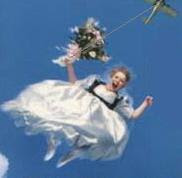